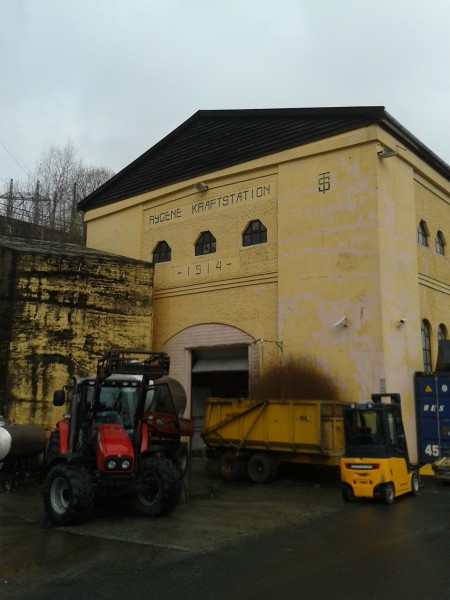 (The first part of this article can be found here: The Norway Trip – Nøgne Ø, Part 1)

My days in Norway involved actually working at the brewery – tagging along with whatever was happening that day and trying to help without getting in the way too much. This included loading the mill, weighing hops, running transfers, helping with gravity measurements (with mandatory sample tasting – GPA, Quadrupel, Half a World Away) and yeast dumping. During my days at the brewery there was a lot of brewing of IPA – 3 batches over the first 2 days added to another batch already in fermenter to make a total batch of about 200hl. I previously mentioned about Nøgne having a large warehouse not far from the main brewery – the logistics of having a fermenter in a building well away from the brewery and bottling line are clearly challenging and time consuming for the brewery, and the need to run wort from the whirlpool into a tractor hauled stainless vessel and subsequently transferring again on the other side takes a lot of time in the brewday. There are currently plans to build a new brewery and bring all aspects back under one roof, much to the benefit of the brewers! I’d envisage a large operation as a result – with a large amount of stock for shipping, vessels and barrel aging beers in the warehouse that all has to be accommodated alongside the malt store, brewery equipment and bottling line.

Another beer brewed there during my stay was a new addition to the Nøgne line of beers called GPA (Global Pale Ale). This is a sub-4.7% beer aimed at being a hop forward pale ale for the Norwegian market (where it can be sold in supermarkets). Some interesting approaches here with liberal use of lighter caramel malts as well as melanoidin malt. This in addition to a higher than normal mash temperature to hold the FG and leave body and mouthfeel to balance the hop additions (including chinook, citra, aurora, simcoe, cascade and pacific gem).
In many ways this is along the lines of a Redemption “Trinity” on steroids – high mash temp with speciality malts to balance high hop rates. A lot of hops went into this beer, especially into the whirlpool (a rate of something like 2.7g/l), in addition to later dry hops to follow – from an earlier batch I tried when there this should be a great addition to the core line up of beers.

Balance is certainly an important aspect of the beers that Nøgne produce, and one that Kjetil says he finds very important. I certainly agree with him – “balance” is a hard thing to describe and most certainly doesn’t mean “unchallenging” as is often the case, but certainly something that Nøgne aim for – hop and malt are prevalent throughout many Nøgne beers, and while one or the other may be favoured, neither is left to completely dominate, and this is very much along my own style of brewing.

Beer isn’t the only thing made there – Nøgne Ø are currently the only European producer of Sake (though Arran brewery have plans to expand into this area) and have previously won awards at the London Sake Challenge. Sake is a drink I knew little about before my visit – the method of making it is fascinating and involves the use of a mould, the Koji (Aspergillus Oryzae) to help break down starches to fermentable sugars followed by use of a specific sake yeast (Nøgne have their own house strain that White Labs store) to convert the sugar to alcohol. Uniquely, sake is the only alcoholic drink where saccarification and fermentation occur simultaneously – there’s a certain amount of feeding of fresh material during the brewing process.

Sake is a live product, and needs to be stored cool – however, this aspect of the supply chain is something that cannot always be controlled, and so a certain amount of sake is pasteurised to improve long-term stability. This does have a certain amount of impact on what is a delicate product anyway (apparently, in Japanese sake making, it is common that no one is permitted to wear perfume or after shave in the brewery), but this is a necessary step for what needs to be a commercial saleable product. On the Thursday there was about 1900 litres of sake pasteurised by running through the heat exchanger to heat to 65C and into an empty fermenter, followed by the reverse to cool the sake back to 20C, taking care not to blow air through the final pasteurised batch. An interesting operation, and nice to try fresh sake straight from the tank over lunch. Nøgne are certainly leading the way for beer and sake making in norway, and indeed in Europe – but there’s also an expanding movement of homebrewers in Norway who are following, and through their webshop they are supported with the sale of ingredients, and even 4L recipe kits based on the Nøgne beers and equipment. It’s not something I’ve seen breweries in the UK actively do, but think this a great idea, not only for the keen homebrewers out there, but also is great for the brewery in getting their name out there. The 4L brewlength is novel too – allowing people to give it a go using their kitchen without the need to go straight out and buy a huge amount of kit.

So the end of a summary of my trip – if you’ve made it this far through both articles then well done! The only remaining thing is to say a massive thanks to Kjetil and Nøgne Ø for offering such a great prize, and thanks to all the brewers and other staff for making me welcome around the brewery, showing me around and how, and thanks for the beers they kindly gave me for sampling! I look forward to my Sunturnbrew on December 21st, and to sample this year’s “unique” (unplanned or otherwise!) version of God Yul at Christmas. Whoever gets their hands on some of the barrel aged versions like the ones pictured is going to be very lucky indeed (I have a barrel aged Imperial Stout to delve into at some point)! The 100% Peated maybe a challenge for future, but the Wit, Blonde, IPA and #500 have already succumbed and been very much enjoyed – #500 drinks far too easily for 10% ABV... Will someone start selling all these in Oxford please on tap and bottle?!

Also looking forward to possibly getting some entries from the Nøgne guys who homebrew themselves and their customers who are keen homebrewers in next year’s UK National Homebrew Competition – be great to see some Norwegian entries!