Earlier this year, David Bishop (otherwise known as @broadfordbrewer) put together an excellent article on the “State of UK Homebrewing“. He kindly asked me to give my take – and I concentrated a bit on what people like to brew, and what might be trends in the coming year or so. Ali Kocho-Williams, as organiser of the UK National Homebrew Competition has kindly allowed me access to use data from the last 4 competitions to do a bit of analysis to see if there are any trends (going into this I had some suspicions).

Jumping straight into it, here’s a table of entries by category for the last 4 years. (Table is responsive, and on a larger screen sortable by each column.)

NB: In 2013, NZ Pale Ales was a separate category – I have merged this with Specialty for comparison purposes.

Winning Best of Show beers have come from:

Plotting the changes as a bar chart we get the following: 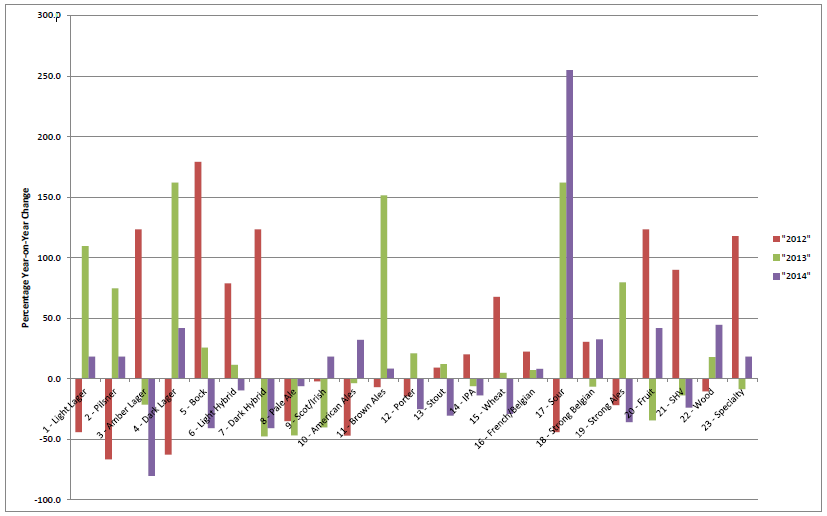 Many of these styles have small entry numbers, and so the changes aren’t necessarily statistically significant (or need little variation to show wild changes). However, worthy of note are:

More interesting are some subcategory splits (I’m not going to bore you with all the splits here...):

Where have all the English IPAs gone to? Similarly, I’m a little surprised to see such a marked drop in Imperial IPAs this year.

I’m surprised there have been so few American Stouts entered (with *none* this year (2014)) – and there is a strong bias to Imperial Stouts. Why are there relatively so few sweet, oatmeal and foreign extra stouts? [The decrease in these is pretty much the cause of the percentage decrease in category 13 in 2014.]

A clear decline shows in the numbers of English Pale Ale styles being entered – and though I’m not *so* surprised by the Ordinary Bitters, what is going on with Strong Bitters?

These figures are obviously only concerned with the entries into the National Competition, and while I don’t think it’s quite reached the point where we can declare the death of bitters and English pale ales in the homebrewing community, trends towards experimentation with wood aging, sour beers and a strong shift in balance in stronger ales towards US styles show that homebrewers are continuing to push the boundaries of their brewing away from more “standard” styles. I think it is also apparent that there is a symbiosis between the commercial sector and homebrewers – there is a two way feed of inspiration between the two (unsurprising given the background of many brewers who have made the leap from homebrew to commercial).

Is this a case of the brewers being partly inspired by guidelines here? If you offer entrants a wide variety of classes to enter,  will they be more likely to enter in those classes? And what of British hop varieties? In the most part homebrewers might appear to have abandoned them a little here – though I hope this isn’t the case – they have so much more to offer than the uninspiring “twiggy” bitter.

While thinking about this post, I also managed to find the following old sheet of entries from the 2009 Sutton competition which makes interesting reading.

A lot of familiar names on there, but a massive slant towards bitters, etc. It may well be the type of competition that encourages this type of entry, but there were no categories to enter in this, and no broad range of BJCP guidelines to judge against. Very few “US” style beers are entered here, though arguably, this was also before the massive range of ingredients was perhaps as widely available as they are now.

Either way, I think it’s clear just how far we have come in homebrewing in the last 5 years – the breadth and popularity have increased enormously and have helped to drive the boom in new breweries in this country.

If there has been a marked decline in the counts of bitters and (as I suspect), and a low number of lager category beers are actually being brewed, could this be having an adverse effect on the quality of UK homebrew? These are all great styles (especially the lighter lagers and lower alcohol bitters) for really testing your own skills as a brewer – there are few places to hide with these styles as any flaws make themselves apparent very easily.

Relatedly, Pete Brown (@PeteBrownBeer,) wrote not so long ago with regard to commercial brewers:

My latest @LondonLovesBiz column – why anyone who wants to be a craft brewer should be required to brew a bland lager http://t.co/OB7wkRjVUy

and there’s a lot of sense in that – to improve, it helps to brew a lot of beer, but also to brew beer styles that help you master the fundamentals and being able to cast a critical eye over your own beer. Many of the (currently) more popular styles can easily “hide” faults (dry hopping, lots of roast malt, high ABV, etc) – it’s not to say that they are bad styles as such, and they are certainly popular. And I certainly don’t want to see less variety and innovation from UK homebrewers (far from it in fact) – but in line with Pete’s thinking, I believe it wouldn’t hurt for all brewers to return to simple, harder to nail recipes to really check out their brewing skills. Brewing as a hobby and business should not sacrifice quality for innovation – the two must go hand in hand.

Arguably, some of the hardest beers to brew are some of the simplest – beers such as (American) Budweiser, with its consistency across multiple sites coupled with the beer’s profile, make it a challenge to brew, especially on large scale. Even if not the most flavoursome, beers like “Bud” are arguably one of the greatest challenges for any homebrewer to take on.

So where are we? Well, I think homebrewing is certainly in a very strong position – I think it is as strong as ever with great innovation being shown by many. But let’s just not lose sight of the fact that the quality of the beer you produce (be it commercial or homebrew) should be paramount. While I think innovation and creativity in brewing beer at home is fantastic, it can’t be without a desire for continuous improvement in quality. Going “back to basics” as a homebrewer (and commercial!) can be of benefit to really fine tune brewing technique and skills,and to really challenge yourself – and for the commercial, I think there are several gaps in the market here – with a few exceptions there is a lack of many good examples of several of these types of beer in the UK market (eg. dunkel, “Kölsch style”, Märzen).

As always, comments much appreciated...