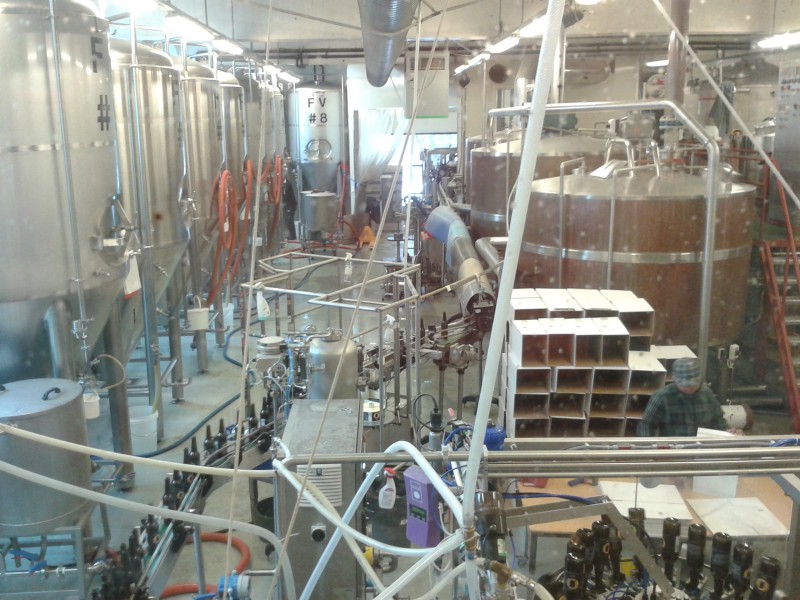 Back in September 2012, I had a good showing in the UK NHC – I’d previously done well in this competition, and this time round went one better and took my first Best of Show award with a Schwarzbier I’d brewed back in February. This was a hotly contested competition (460 entries) with some great beer being put in, influenced in no small way by the first prize offered up by Kjetil Jikiun, Head Brewer at Nøgne Ø – a trip to Norway to work in the Nøgne Ø brewery for the week. And so, at an early hour on Mon 15th April, I navigated my way through Heathrow to start the journey to Oslo, and then onwards via a connecting flight to the ex-Norwegian Air Force base, now airport, near Kristiansand in the south of the country. Like the UK, spring is late this year in Norway – and a foot of snow had fallen the previous week, rather entertainingly after the mandatory cutoff date for being able to have winter tyres on your car... luckily, the roads were clear, and remaining snow was melting along with the froken lakes and rivers.

I was met by Snorre, the Nøgne webshop manager, who kindly gave me a lift to Grimstad centre where I was staying in B&B at the Cafe Ibsen. Grimstad is a small town on the southern coast with a strong maritime influence, one of Norway’s sunniest places and has had several notable local residents including the playwright Henrik Ibsen, and world champion cyclist Thor Hushovd. The town is quiet out of season, and there isn’t a huge amount to do, though the Apotekergaarden located not far from Cafe Ibsen is a nice restaurant/bar that serves two Nøgne beers on tap (I had the Lemongrass ale and the Porter) as well as a wide range of bottles.

A general warning to visitors to Norway follows: it isn’t cheap by UK comparisons – and even more so beer which has strict legislation relating to advertising (none!), taxation (beers over 3.5% are heavily taxed in an attempt to reduce consumption) and availability (beer over 4.75% cannot be sold in supermarkets, but is instead sold through the Vinmonopolet, (“Wine Monopoly”), a state owned company that sells wine, spirits and beer). Beer over 4.75% is taxed at the same level as wine and spirit. I’d estimate beer to be in the region of 3-4 times more expensive than a similar beer in the UK. The brewery is currently located in an old hydroelectric power station. The three turbines have been relocated inside of the hill behind the brewery, making way for a brew system of about 50hl length.

Unlike many UK breweries, Nøgne use a three vessel system (mash tun, lauter tun, kettle – seen in image on right) followed by a whirlpool (out of shot). Mash tun and kettle are heated by steam jackets, with rakes provided in the tuns. The lauter tun thankfully has a spent grain pump, but this doesn’t negate the need for getting inside and cleaning the last bit of spent grain out... Within the brewery itself also sit fermenters (left hand side on wall), a CLT (acting as a fermenter while I was there), and to cap it all off a bottling line snakes amongst the vessels middle and off bottom of picture). Upstairs on a floor the same size as the brewery lives the grain store and mill that feeds straight down into the mash tun below. In addition, there are further fermenters amidst a large storage warehouse on the other side of the valley (the “Lagerhotell”). One of the fermenters is a large cylindrical vessel, with I think a volume over 250hl – even then, the quadruple batch of IPA (~200hl) that was completed on the Weds was apparently spewing foam everywhere by Thursday...

Over in the storehouse, it’d probably be described as “beer geek heaven” – as well as the fermenting vessels, a huge amount of bottled Nøgne stock sits in bottle and keykeg, and then there are the barrel aged beers sitting patiently – a large number rest on the shelving units in amongst the packaged beer. You might even see the odd firkin of beer if you look carefully, though there appears to be little of it – the exception rather than the norm.

More on my trip in the second part here: The Norway Trip – Nøgne Ø, Part 2